The highlight of the Khao Hom Thai experience revolved around my inability to keep track of my cell phone. After being seated in a booth in the back by the gracious host/server, I scoped out the place. The space was formerly occupied by my go-to Thai place, Karta Thai, which moved about 14 blocks north on Central, meaning you will get to virtually visit in about 1 year, she says hyperbolically. While the menu looks similar, the seating has been altered with the replacement of the south wall booths by tables–increased seating capacity, decreased coziness.

By my calculation there are a total of 3 Thai restaurants on Central. So I devise a plan–order Pad Thai, ubiquitous to Thai cuisine, at each place, thereby enabling a fair comparison.

Khao Hom Thai offers lunch specials, which include a salad. The salad arrives almost immediately. Despite containing iceberg, my pet-peeve green, it is fresh, nicely presented, and tastily dressed. I give it a qualified seal of approval. The Pad Thai with tofu is delivered after a suitable interval, also attractive, sizzling hot, and delish. However, having forgotten that Pad Thai is noodle-rich and veggie-poor, I realize that the  all-Pad Thai plan will need to be reconsidered. 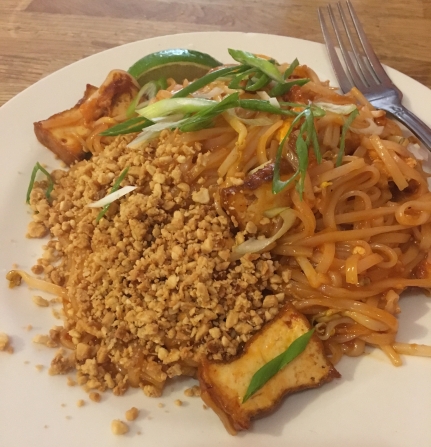 A table of 5 youngish men and 1 woman of a similar age, are seated next to my booth. Yay! I get to listen to their conversations. They are co-workers, wearing unreadable badges on lanyards. They discuss whether or not they are millennials. One of them checks Google, learning that the millennial window runs from the early 1980s to the 2000s. One of the guys terms them, “he stupidest generation”. Another guy calls millennials a “movement”. The response, “I want to disassociate myself from that movement.” Self-loathing millennials! They discuss Shark Tank, and chocolate chip cookies. These are intelligent people with a good rapport.

Back to the cell phone. The bill is modest, $12.00 including a 25% tip, and I leave with a take out carton containing another meal. (Note: Henceforth I will carry a container with me for leftovers. They are rarely recyclable or compostable.) Post-lunch I stop at the Eastside Co-op. In the co-op parking lot, I decide to check my cell. NO PHONE! Mentally retracing my steps, I realize that I left it lying on the booth seat. Fortunately, at least in this circumstance, I also have a work cell and use it to call the abandoned phone. A guy hesitantly answers and I learn that, indeed, it was left in the booth.

Upon return to the restaurant, I am greeted by the host, who raises his arms, exclaiming, “There she is!” He directs me to the man who found the phone, a member of the group of 6 upon whom I eavesdropped. They were all pleased have been part of a good deed.

Until next week from El Taco Riendo, do something dumb to make someone else feel helpful. It’ll make you happy, too!